Recently, I was in the seaside state of Lagos, arguably one of Africa’s Largest Metropolis and Nigeria’s most successful state. As one of the smallest states in the nation, Lagos has distinguished itself as Nigeria’s most industrialized and developed state. While there, I had the opportunity to experience various cities such as Lekki, Ikeja, Ikoyi, and Ogba among others. It was quite a wild experience for me coming as an American without one family tie to the nation. That really mattered, because Nigeria has not yet set up a sustainable framework to help visitors navigate housing, banking, tourism and small business. To help with this, I am releasing a series on navigating Nigeria for foreigners and also webinars on how African states can better engage and attract visitors.

Despite the research I undertook to prepare for my trip, I quickly found that many aspects to West African travel are not discussed. As a nation of nearly 200 million, Nigeria is undoubtedly a young country—not just historically, but also in the average age of its people. As I waded through a sea of brown faces, I was early struck by how much the people looked very much like Black Americans in almost every way. Being a Black and African History enthusiast, I already knew that the majority of Black Americans who were brought to the United States via the Transatlantic Slave Trade were from the region we now know as Nigeria. On a trip through Ikeja GRA, a Nigerian Taxi driver strongly contended that I was definitely Nigerian, despite my protests to the contrary (a very common theme throughout my stay). When finally he relented and accepted my assertion, he asked if I had taken a DNA test to “learn my tribe” and when he learned that I hadn’t; he scolded me to quickly get on with the process. We laughed.

As I was having the conversation with him, I realized I didn’t actually want to have a DNA test done—at least not now. I liked being African American, and I didn’t want to be anything but that. It wasn’t until I lived in Nigeria that I realized how much tribalism plays a huge roll in everyday life. While tribalism is not exclusive to Africa, it has become a huge barrier on the continent. The practice often blocks tribes from certain industries and in many cases prevents vital growth. Witnessing tribalism first-hand really helped me to understand the experiences and conversations that swirl around Black Americans and African immigrants. Simply put, many new African immigrants bring kente and tribalism with them. 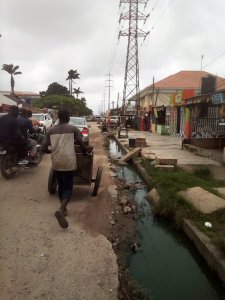 You see, most African Americans (myself included) do not understand tribalism and how it informs the lives of most (if not all) Africans. This tribalism comes down to culture, which is often the only measuring stick by which one tribe may seek superiority or differentiation from another. Often this tribalism is backed by an old grievance or a fabled war or skirmish. Many were able to successfully leverage tribalism to institute everything from slavery to colonialism in Africa.  As a foreigner, I was often perplexed by the deep divisions between people who looked identical, ate essentially the same foods, enjoyed basically the same kind of music, and spoke Bantu languages that varied sometimes ever so slightly.

Africa has paid a hefty price for tribalism; especially in a racial world. It’s hard to play an analog game in a digital world. History shows us how America gained prominence in the world by squashing the petty European tribal divides (French, German, Italian, etc). And that is the mantle of true leadership, the ability to amalgamate a group into a productive whole. In this way, as the least tribal of all Africans, Black Americans occupy a unique position in the African world. Because of this, African Americans have had greater forethought about their African brothers worldwide, pursuing linkages and leadership which is inclusive rather than exclusive. This is a trait Black Americans must never give up, because it is the definition of true leadership. In fact, the African nation that determines to abandon tribalism, leverage its Diaspora and create meaningful business and sociopolitical linkages with Africans of the Transatlantic Slave trade will uniquely position themselves to become a world leader in the future.

I quietly began to realize how happy I was to be Black American as I walked among my Nigerian distant cousins. I realized that even Africa’s freedom from colonialism was powered by the Black American civil rights struggle and the synergy created between both groups. Often, Black Americans are so focused on what they think is wrong with them, that they can’t see all that is right. The truth is that no culture or group is perfect, but if you learn to appreciate who you are and what you have you can aspire to even greater heights. The brutal specter of slavery often clouds our view of the wonderful things we have accomplished and who we have become. We forget that while adversity can cause trauma and dysfunction, it can also build strength, character, camaraderie, compassion, leadership and intuition.

As I interacted with the many beautiful tribes and cultures in the streets and cities of Lagos, I realized how Black American culture was everywhere. Thanks to Western media exports, there was not a place I could go in Lagos, not a television show, personality, musician, preacher or waiter that was not familiar with Black American culture, music and slang (ebonics/pidgin). The world knows more about Black Americans who comprise a minuscule percentage of the U.S. population than the whole of Africa.  Seeing that helped me to understand that it is Africa’s responsibility to tell it’s own stories to the world. If someone thinks you “live in trees” it’s because African nations and media have not submitted a better narrative. “We don’t know you, because you have never told us.”  Unfortunately, African states are not making consistent efforts to export its own narrative in media nor connect with African Diaspora the way the West or Asia does with its own populations abroad.  Such endeavors would be a real game-changer in the world today.

In time, I began to see that Lagos was a place of great extremes. I estimate that a good 60 to 70 percent of Nigerians were extremely poor. I quickly learned that what was considered average living standards in the United States often amounted to luxury in Lagos. I had been told that Lagos was like London or New York, but quickly learned different in less than a week on the ground. It was a bit disconcerting for me to realize that the majority of Lagosians probably could not afford a ticket to London, yet alone a Western education abroad. It began to give me a better context for the Nigerians I had met in the United States. The truth is that the “average” Nigerian will likely never make it to the U.S. and you and I will never know them. I often met many Nigerians in Lagos who told me that they couldn’t get visas to major Western countries and sought my help to “get out.” It was the sheer desperation in the request that led me to realize that a solution to the African immigration issue may require a collective global effort.

Lagos felt like Detroit, Chicago’s Southside, Compton and South Central—except infrastructure and poverty are on a level for which I was not fully prepared. But it was more than just the lack of infrastructure, it was the feel of an under-served urban community. Lagos was jive talking guys and gals making wahala (trouble) at night, smoking weed, hissing at pretty girls, and grilling suya at dusk. It was brilliant black nights and soft breezes contrasted with open gutters and piles of unpacked rubbish. Lagos was also crisply dressed young men and women hurrying to work and old men sleeping on wooden palettes while women carry packages on their head. Nigerians were fun, helpful and humorous.  To top it all off, it was wild. Every Nigerian I met, eagerly and comfortingly assured me that there were absolutely “no rules.” And actually, I was fairly convinced–from the policemen who tried to bribe me and the congested traffic where driving rules didn’t exist, to the fist-fights and arguments that seemed to flare up everywhere!

Next week I will review a phenomenal book by a Nigerian author and we will return to our regularly scheduled content in September. Got Feedback?

This site uses Akismet to reduce spam. Learn how your comment data is processed.