Just recently, Equifax reached a settlement regarding a mega-scale data breach. It is among the many tech companies that have seen enormous data breaches, including major banking institutions, Facebook and more recently WhatsApp. These are all companies that promise its users that not only is their data safe, so are their conversations. Privacy is of great importance as well as confidentiality; but how well can we them? How safe is their safe keeping?

The U.S. government levied sanctions against Chinese technology giant HuaWei among others, regarding consumer safety information. But is the world able to trust U.S. tech giants with worldwide user data?  What about those here in the USA?

As many more people have taken to social media to do more than keep up with friends and family; the need for user privacy and prudence has increased. Many have seen social media as a revenue stream or even a kind of small business.  Some people quit their jobs, change their business strategy and buy expensive equipment making huge investments into their new Instagram Feed, YouTube Channel or travel blog. While these social media platforms may yield some dividends for those inclined, it is important to remember social media’s back alley.  whether you are just an average joe with a Facebook account or a professional artist hoping to make a living on YouTube productions, you still need to exercise a level of care.  Here are three things you’ll find in social media’s back alley:

3. Web Brawlers: Back in the summer of 2007, I remember seeing an ad online for an internet troll. Yep, that’s right. They wanted people to join what was similar to a call center, but equipped with laptops. A few years later, I read a curious article about a man who worked in a “troll mill.” These were actual businesses, that often worked for special interest groups, campaigns, and other ideologues to champion certain ideas. They acted as single agents and also in groups, descending on arguments, ideas and conversations on social media with the intent of disrupting, diluting or countering arguments that went against the position of the benefactor they represented. Beware of who you argue with online, many are just disruptive who wish to subvert growing momentum in a particular area. The practice is so popular, you can even find websites that offer “trolls strategies” on how to divert conversations, create internal strife, create division and produce confusion. As a communications professional I am always aware of the methods and so they are easy to spot. But that might not be so easy for you. We will explore some anti-troll strategies in another article. But it is important to know that they exist. While in the past there were troll mills, now those services are contracted out to people that may live in any part of the globe and can speak your language. In fact, I have a good memory about social media, and I have even seen some trolls graduate to having their own platforms and gaining thousands of followers, shares, financial contributors and friends.  Despite their growth or their “contribution to a few ‘good’ causes,” one of their tell-tale signs, though,  is that they always generate strife within a group, arguments, confusion or controversy.

2.  Algorithms Alchemy: Around 2014, we started to see Google toying with algorithms to control search engine results. At first, it seemed like a good idea. They warned everyone with a webpage to make certain upgrades so that their page could be easily found. But, then the algorithms changes just kept changing. From Google, to Facebook, to Instagram, Twitter and more, it became harder to find what you wanted or to even see posts and shares from people you actually followed, friended or subscribed. There was also a plethora of crazy generated content to boot! Some algorithms post obviously slanted or inflammatory ads. Here is an ad campaign from Instagram that repeatedly targets black men as crime offenders. 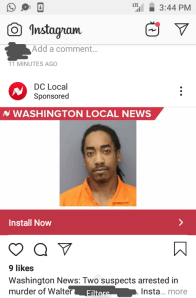 Beware of the algorithms.  Social media, like search used to be organic.; now the quick and dirty secret is that it is controlled by special algorithms that are not always curating the content YOU want. This may be an annoyance for you, but it might also affect your business or your kids. Some users are not even aware that their pages, accounts and websites are on special algorithms and lists that make their content unavailable or unsearchable.

I’ll give you an example.  One day as I was surfing on an open network and I looked up a YouTube site, the user’s page was intact, but there was no content.  Later that day I went to another WiFi network, and the content was visible. Web providers may also be limiting your reach even for those who specifically navigate to your page, site or timeline.  Curious, I checked another webpage on an open WiFi network and found this notification.

Beware, the internet and social media is not open.  As an American, though, I must admit I was a little shocked–I didn’t know it was that way here. Best advice: Encourage those who like your content to visit you directly at your website or homepage and question their local provider if they are not able to access you online. There may be a reason you are not getting the “traffic” or “numbers” you attempt.

3. The Bad Guys: Aside from the trolls, there are also people who prey online; these people are seeking victims for their crimes. And sadly, they are stationed all over the world, wherever there is an internet connection. From identity theft to pedophile rings, they exist online and offline. It is critical to realize that someone you don’t recognize who asks you to add them as a friend could be an unscrupulous pedophile that noticed your kid in your profile photo.They assume they will have access to all 1000 of your closest friends–including your child.They bank on the fact that those closest to you will be the ones you interact with most. But apart from pedophiles, scammers and sex offenders, there are also others online seeking personal information to damage you, your family or business; to attempt fraud or identity theft and so much more. Remember to follow your gut when interacting online–beware of those who start arguments, useless divisions, ask for too much information, make unusual claims or try to get too close to you too soon. Beyond the algorithms and data breaches, remember, your information and your safety is yours to protect.

If you would like a personal social media report, you can get one below for just $12 for individuals.